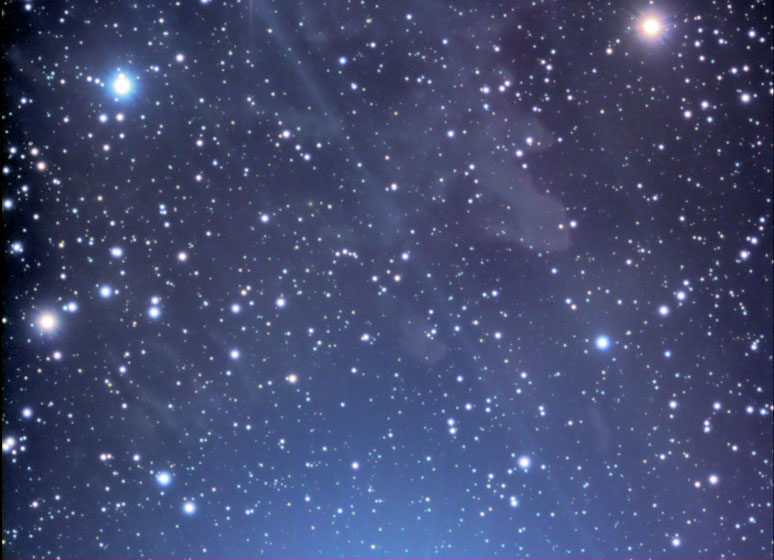 The Western portion of NGC 1990 which surrounds the bright (1.74 magnitude) type BO belt star Epsilon Orionis, aka Alnilam (off screen at lower center). This very faint reflection nebula glows in the intense output of Epsilon Orionis while smaller reflection/emission nebula glow faintly just to the west of the star (North is left and West is up in this image).  There is a pencil thin reflection from a camera internal surface extending from left top to right bottom.  Note the little "Witch Head" nebula in the above image.

The film image I acquired in the 1990's is used in Wikipedia's entry on the star Alnilam.  Every so often someone does a 'study' of that image and concludes NGC 1990 does not exist.  They fail to consider the media used (hypered Kodak PPF color film at prime focus) and compare it to  enhanced CCD images most of which are over processed.  Some of the studies are quite interesting, especially the logic used (see http://www.umich.edu/~lowbrows/reflections/jan-2009-public.pdf,  a study where I suspect the conclusion was written first).

See the following for an image that doesn't suffer for overprocessing.   http://blog.deepskycolors.com/archive/2010/10/22/orion-from-Head-to-Toes.html